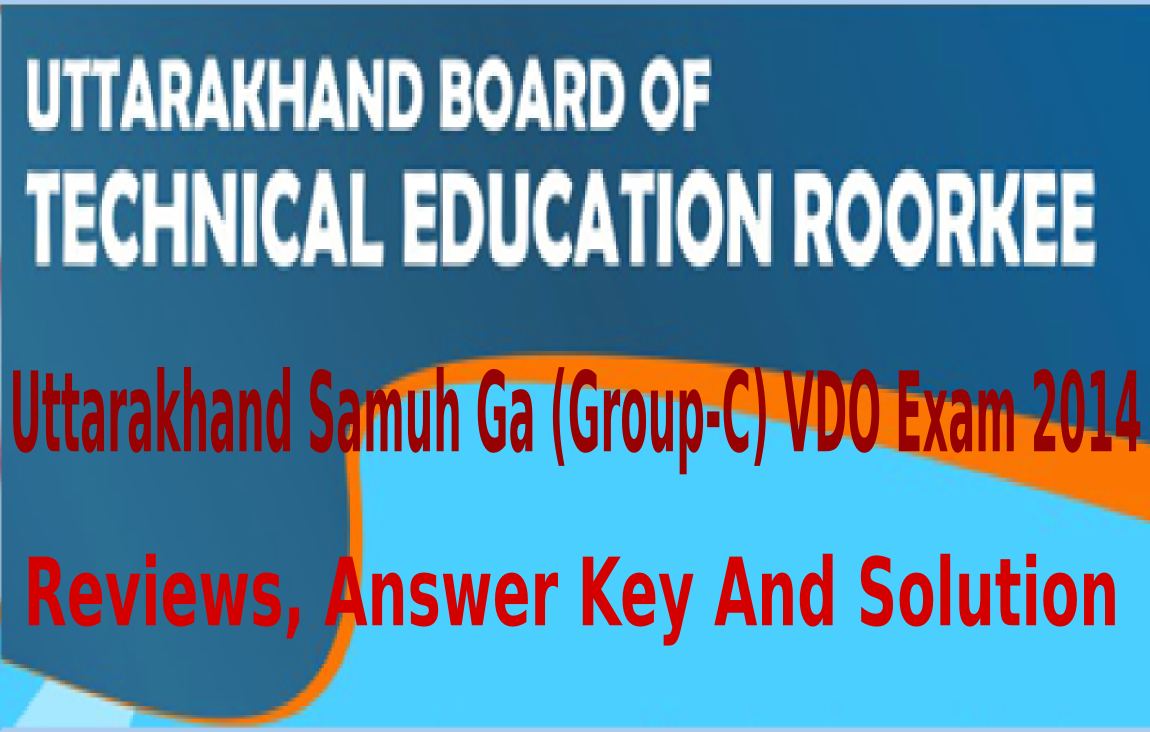 Hello Readers Welcome To the site Of Indjobsportal.in,Uttarakhand Board of Technical Education (UBTER) was made by the Uttarakhand legislative assembly and assented by governor on 13 jan 2004. Uttarakhand Samuh Ga (Group-c) VDO exam was held on 7th December 2014 Sunday. exam paper consist of 100 Objective type questions in 2 hours that was asked from Uttarakhand General Knowledge, General Knowledge, General science & General Hindi. the question paper consist of four sets i.e. Set ‘A’, Set ‘B’, Set ‘C’ and Set ‘D’. Same questions were asked in every sets, but the questions were in different orders in every sets. the solutions and answer key is given below:

2. The solubility of gas in water depends on: Ans – All the above (D)

4. Which of the following is the heaviest Metal: Ans – U (D)

6. Which one of the following is not an element: Ans – Ozone (D)

13. The most commonly used material transistor is: Ans – Silicon (A)

14. Which Oxychloride has maximum pH Ans – NaClO (A)

15. Which one is the strongest electrolyte in the following: Ans – NaCl (A)

17. The motion of the planets in the solar system is an example of the conservation of: Ans – Angular Momentum (C)

18. The ratio of rotational and translatory kinetic energy of a sphere is: Ans – 2/7 (B)

23. The surface tension of a liquid: Ans – Decrease with Temperature (D)

25. Dielectric constant for metal is: Ans – Infinite (B)

26. Which is the most suitable for making permanent magnet: Ans – Steel (A)

28. for which of the following the resistance decreases on increasing the temperature: Ans – Germanium (C)

31. Which disease in children is caused by intense use of nitrate fertiliser: Ans – Methemoglobinemia (B)

33. The part which is grafting on stalk of another tree is called: Ans – Scion (D)

34. Which of the following is a non endospermic monocot seed: Ans – Castor (B)

37. The gas absorbed during photosynthesis is: Ans – Carbon Dioxide (D)

38. The iodine test is used to detect: Ans – Carbohydrate (C)

41. If blood cells are eliminated from the blood, the liquid left is: Ans – Plasma (B)

44. The dimension of coefficient of thermal conductivity is: Ans – (B)

46. A car when passes through a converse bridge exerts a force on it which is equal to: Ans – A

50. Aditya Joshi becomes the number one (1) Junior player in which game: Ans – Badminton (b)

55.Badrinath Is situated at the bank of which river:Ans – Alaknanda (C)

56. ‘Lokmanya’ is also name of which man:Ans – Bal Gangadhar Tilak (A)

59. Which of the following is/are valid domain name extension?Ans – All the above (D)

61. Who constructed the Sanchi stupa?Ans – Ashoka (A)

62. Which of the following is the national voter’s day?Ans – 25th January (D)

64. Micropyle of seed facilitate in the entry of:Ans – Pollen Grains (B)

67. Which of the follwoing is speaker of Uttarakhand VidhanSabha:Ans – Gobind Singh Kunjwal (D)

70. Bhatwari and Mori Tehseel is located in which district:Ans – Uttarkashi (B)

71. Who invented the jet engine:Ans – Sir Frank Whittle (B)

72. Gangotri and Yamnotri Temples are located in which district of Uttrakhand:Ans – Uttarkashi (D)

73. Garud and Kapkot Block Head Quarter is located in which district:Ans – Bageshwar (C)

74. Which of the following is the state bird of Uttarakhand:Ans– Monal (B)

75. The high court of Uttarakhand is situated in:Ans – Nainital (C)

76. In Uttarakhand, which district is not situated in Garhwal zone:Ans – Bageshwar (A)

77. The second state language of Uttarakhand:Ans– Sanskrit (B)

79. In Pithoragarh District which is/are located:Ans – All of the above (D)

81. The state game of Uttarakhand is:Ans – None of these (D)

82. How many Rajya Sabha Seats are there in Uttarakhand state?Ans – 3 (D)

83. How many seats are reserved for scheduled tribes in Uttarakhand State Assembly:Ans – 2 (B)

84. Which is the largest minority in Uttarakhand:Ans – Muslim (B)

85. Katarmal Temple is associated with deity:Ans – Sun Temple (B)

88. Who was the mother of lord Mahaveera:Ans – Trishala (B)