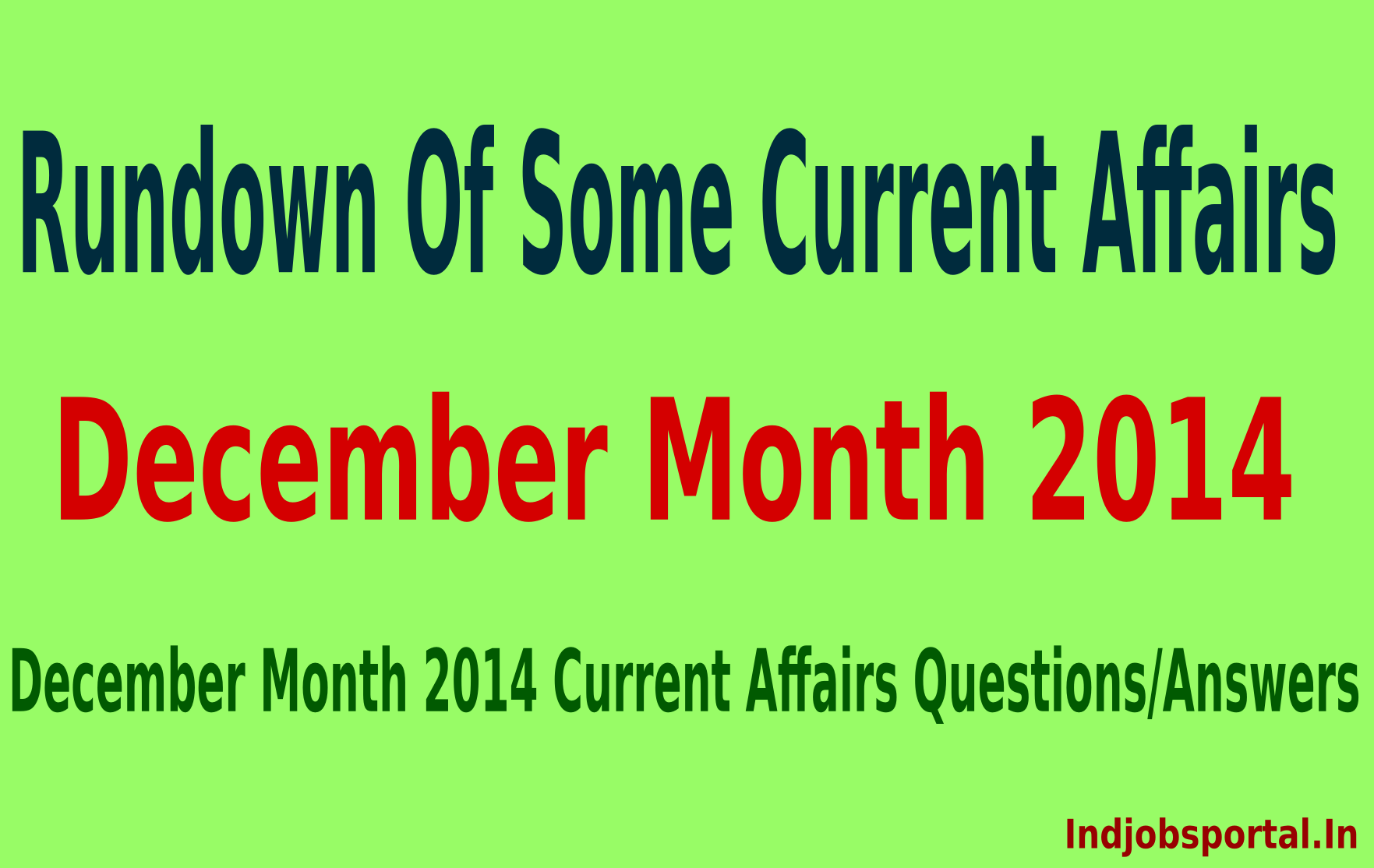 Hello readers welcome to the site of Indjobsportal.in, which brings General Knowledge and Current affair Materials, For some Competitive exams, Governments Recruitments, SSC, IBPS and Other, Current Affairs And General Knowledge is the Determined Part of exams, So You have to stay updated in latest general awareness and GK knowledge.

Here Are Given All general knowledge Question/Answers, amazing general awareness Questions and Useful information about most popular matters Of December 2014 month from all categories:

Question 1: On 30 November 2014 who became the first Indian footballer to be inducted into Asian Football Confederation (AFC’s) Hall of Fame?

Question 2: Indian woman badminton player P.V. Sindhu won which Grand Prix tournament on 30 November 2014, which was her first title of the season?

Question 3: Who won the Presidential elections held in Uruguay on 30 November 2014?

Question 4: Who was conferred with the Lifetime Achievement Award at the 45th edition of International Film Festival of India (IFFI)?

Get This Book: Perspective on Current Affairs 2014 PB by Founder Ed

Question 5: The RBI in its 5th Bi-monthly Monetary Policy review for 2014-15 fiscal presented on 2 December 2014, kept the most important repo rate unchanged at 8%. The last time this rate was changed was?

Question 7: During December 2014 who was appointed as the Secretary General of the Lok Sabha, an appointment that was protested by the Congress as it alleged that procedures were not followed in this appointment?

Question 8: What was India’s rank in the list of corrupt countries released by graft watchdog Transparency International India (TII) on 3 December 2014?

Question 9: The Indian Air Force (IAF) on 5 December 2014 sent supplies of drinking water to which of its neighbouring country?

Question 10: The Reserve Bank of India (RBI) on 5 December 2014 gave what relaxations in norms for White Label ATM (WLA) operators, what they can do?

Answer 10: Accept international cards and also source cash supply from other than banks.

Question 11: Andhra Pradesh Government on 8 December 2014 signed an MoU (Memorandum of Understanding) with which country to assist it in developing master plan for the new proposed capital city?

Question 12: Which private sector bank on 8 December 2014 announced hiking of ATM usage charges for its saving account holders from 1 January 2015?

Question 13: Which Indian private airline is presently going through rough weather and an emergency board meeting was held on 8 December 2014 to take important decisions pertaining to airline’s recapitalization and payment plans for vendors?

Question 14: Which Indian dug company launched in India the first biosimilar version of the anti-inflammatory medicine Adalimumab, the world’s top-selling drug, at a fifth of its U.S. price on 9 December 2014?

Question 15: Which ally of the ruling National Democratic Alliance (NDA) announced quitting the alliance on 8 December 2014?

Question 16: World’s longest train journey was completed on 9 December 2014 when a train covering record 13,052 km long journey reached Spanish capital Madrid. This train had started its journey from which country?

Question 17: Which country was rated as the Most Dangerous Country in the World in the Country Threat Index (CTI) released on 9 December 2014 by IntelCenter, a Washington-based company working for intelligence agencies?

Question 18: on 11 December 2014, who declared 21 June as World Yoga Day, for which the Indian Prime Minister Narendra Modi had urged the world community three months ago?

Question 20: What was the consumer price or retail inflation in November 2014 as announced by the govt. on 12 December 2014?

Question 21: Who was named Time Magazine’s Person of the Year for 2014 as announced by magazine’s managing editor Nancy Gibbs on 10 December 2014?

Question 22: The Central Bureau of Investigation (CBI) on 12 December 2014 senior Trinamool Congress leader and West Bengal Minister Madan Mitra in the multi-crore Saradha scam case. The arrest comes as a major embarrassment to the West Bengal’s ruling party which had already suffered a battering of its image on account of several of its leaders involved in various Ponzi scams. Madan Mitra is holding which portfolio in West Bengal Govt.?

Get This Book:  Objective Current Affairs Yearly Round Up 2014

Question 23: What was the name of the lone heavily-armed man of Iranian-origin who held 17 people hostage at a café in Sydney for around 17 hours on 15 December 2014 before being killed in the police attack?

Question 24: Which Indian politician was recently appointed as a member of United Nations Environment Programme’s (UNEP’s) advisory board?

Question 25: Defence Minister Manohar Parrikar flagged off the first nuclear-powered submarine manufactured indigenously in India for its sea trials from Visakhapatnam on 15 December 2014. What is the name of this submarine?

Question 26: Which company was ranked at the top place in the Fortune 500 list of Indian companies for 2014 that was released on 15 December 2014?

Question 27: Which prominent country’s currency came under tremendous crisis on 16 December 2014 as the price collapsed almost 11% against US dollar on this day?

Question 28: What punishment was given to Indian woman boxer Sarita Devi by the International Boxing Association (AIBA) on 17 December 2014 for refusing to accept Asian Games bronze medal during Asian Games 2014 held in South Korea?

Question 29: What is the name of the heaviest next generation rocket launched by ISRO on 18 December 2014 that marked first step towards India’s manned missions?

Question 30: The Reserve Bank of India (RBI) on 17 December 2014 imposed fines on state-run Bank of Baroda (BOB) and ICICI Bank – the largest private bank in India. What was the charge on these two banks?

Rundown Of Some Nobel Prize Winners of year 2014

Question 31: A latest report on the status of health insurance in India prepared by the Insurance Regulatory and Development Authority (IRDA) was tabled in Parliament by Union Finance Minister Arun Jaitley during December 2014. According to this report what percentage of Indian population has been covered under health insurance?

Question 32: Who was appointed as the new Director of Research and Analysis Wing (RAW), India’s external intelligence agency during December 2014?

Question 33: Indian Navy achieved a huge milestone in the field of naval aviation when the first prototype (NP1) of Naval Light Combat Aircraft (LCA) made its first successful flight from ski-jump facility on 20 December 2014. This historic flight was conducted at which shore-based test facility of the Indian Navy?

Question 34: Which party emerged as the largest party in Jammu & Kashmir Assembly elections of 2014, results for which were declared on 23 December 2014?

Question 35: The Reserve Bank of India (RBI) on 23 December extended the deadline for exchanging pre-2005 currency notes of various denominations including Rs. 500 and Rs. 1,000. What is the new deadline?

Question 36: What important recommendation was made by I.M.G. Khan Committee which was constituted in February 2014 to review the existing test system of the Staff Selection Commission (SSC)?

Question 37: Health & Family Welfare Ministry launched “Mission Indradhanush” on 25 December 2014. What is the objective of this initiative?

Answer 37: To achieve full immunization coverage for all children by 2020.

Question 38: The Union Government on 24 December 2014 made announcement to award the Bharat Ratna, country’s highest civilian honour to former Prime Minister Atal Behari Vajpayee, and educationist and social reformer Madan Mohan Malviya. With this announcement how many personalities have received Bharat Ratna?

Rundown of Some Common Termonology and Abbreviations Used In Banking Sector

Answer 39: He is the first non-tribal Chief Minister of the state

Question 40: An AirAsia plane with 161 people on board lost contact with ground control on 28 December 2014 while flying over the Java Sea. This plane was on its regular flight for Singapore from which provincial city in Indonesia?

Get This Book: Current Affairs for Civil Services IAS / PCS and all other Examination 2014